Today is Monday, Tanna, and this particular Monday is an observed national holiday. Like many things taken for granted when I was a child, there is considerable contention surrounding this second Monday in October.

Long recognized as “Columbus Day,” it celebrates the historic voyage by Christopher Columbus across the Atlantic Ocean in 1492. His destination was the far east and he gambled they would not sail off the edge of the world. And he was right. Earth is spherical. However, it’s much larger than he conjectured. He assumed he’d landed in India, when in reality, he anchored his ship in a cove off a Caribbean Island, the one we recognize today as Cuba.

But, in my school days, we all learned, “Columbus discovered America.”

The irony of this misleading historical fake fact is that he, himself, never set foot anywhere on the North American continent. He gets credit for discovery, however, even though the islands and the continents of the western hemisphere were occupied already by well-established cultures of native people.

Those he met at the end of his voyage must surely be residents of India, he reasoned. And so, though they were already known to each other by many other names, the First Peoples of North America came to be known as Indians.

This misappropriation became ludicrous in my mind the year I actually visited India and met genuine Indians. Since then, I resist the notion to call our indigenous nations by that term. Ojibway, Seminole, Cherokee, Choctaw, Kaw, Ponca, Apache, Lakota, Arapahoe, Tlingit, Haida, Hopi, Navajo (to name but a few)—each group formed its own nation with its own economy, culture, and government. The influx of Europeans ignored the autonomy of natives. European arrogance and entitlement have led to centuries of conflict and bloodshed.

Today there is a movement to recognize the dignity of the remaining indigenous populations, not only here, but indigenous people around the world. And that traditional holiday celebrating Columbus is now recognized in many hearts, and a few states and municipalities, as Indigenous People Day.

Our recognition and respect go far beyond one day, though. As the plight of our planet grows ever more dire, indigenous people raise their cry of dissention—and many others join them. Books on the native ways are available. Panels of indigenous leaders offer international online seminars in which the panelists share thoughts, concerns, ideas, and suggestions for moving forward.

I am listening. Perhaps in your day, Tanna, the Columbus celebrations will have retreated to a distant corner, like a demoralized dog, head down and tail between its legs.

Native peoples on every continent lead the way in our infant efforts to bind ourselves intimately with the natural world. Thomas Berry recognized this in his writings. “We have even forgotten our primordial capacity for language at the elementary level of song and dance.” He went on to point out how native Americans revere our wild neighbors through their musical and chanting ceremonies.

“One of the significant historical roles of the primal people of the world,” Berry wrote in The Dream of the Earth, “is to call the entire civilized world back to a more authentic mode of being. [Native peoples] are emerging as one of our surest guides into a viable future.”

Tanna, I struggle for words to describe what’s in my heart when Berry refers to native music from the wild places. One panel I experienced during the heat of this COVID summer included indigenous women of all ages, and from varied locations in the western hemisphere. The Ecuadorian woman, Patricia Gualinga, mentioned how the meetings her people hold always start with music, to create harmony, and that all participants—male or female, young or old—are treated with the same respect and consideration. All are equal in their councils.

Strangely, this draws my mind to our District 79 state representative race. Ken White, the man challenging the conservative incumbent, is a musician. He shows up at campaign events with a guitar strapped to his shoulders. And I think to myself, It wouldn’t hurt to bring a little music to ease the tension in our statehouse. 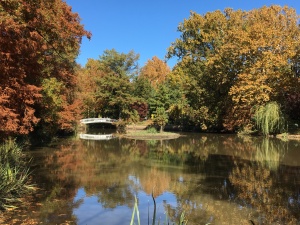 Happy Indigenous People Day, Tanna! I hope that in your time, it is without question or contention the focus of an October holiday. To the leaders of the people so long abused by our national and state policies, I say, “Lead on. It’s your turn now.”

And I truly hope they help us find the way back to a thriving relationship with the natural world.

Pardon me now, as I head off on my own private walk in celebration of Indigenous People Day, an effort publicized online as the Rising Hearts Run/Walk, located anywhere on Turtle Island.