I have limited experience with hospice workers. My mother was on hospice before she died and my dad was deeply grateful for the compassionate assistance the workers brought to their home. This concept of providing dignity to those facing imminent death is fairly recent. There was nothing like that available for me three decades ago when my husband struggled with cancer.

It seems somewhat audacious, maybe even preposterous, to think that those responsible for the decline of our planet’s life systems would dare to consider themselves hospice workers. How could agents of death possibly bring compassion and dignity to the decline of the climate conditions that support all life forms on Earth?

When I am in a down mood, I see humanity as a species that needs to go, in order to save the rest. Nature needs to eliminate her threat and we are the major cause of today’s destruction. Those who care seem to have little influence on the those in leadership positions. We are caught in a system that we cannot seem to change, trapped like animals in a live trap.

As a young widow, years ago, I taught earth science at the local high school when I was struggling to find a new life and purpose. I tried to infuse awareness of the decline of the environment in the teenagers. Considering all of geologic history, today’s situation apparently is not the first time that a life form created mass extinction through its waste products. The waste product for early single-celled life in the oceans was oxygen. Through proliferation, the simple metabolic processes of early life changed the composition of the atmosphere, paving the way for new life to evolve.

Geologically and astronomically speaking, our solar system is roughly halfway through the sun’s expected life. Given a few more billion years, there should be plenty of time for new life to evolve from the scraps left after this climate crisis settles into a new equilibrium. Am I comforted by this thought?

I have mixed feelings about it. When I watch neighbors roar past my Prius on the highway in 4-wheel drive fuel-guzzling pick-ups, or watch Styrofoam cups blow into the tall grasses along the road, or see trash, littered by passing motorists, build up around our small pond at the corner of two paved roads, I think to myself, “Humans are such slobs. Maybe it’s time. Nature is out to rectify our wrongs.” If we view the entire planet as one living organism, we humans, through our collective ignorance and apathy, are a disease to the planet, like its terminal cancer.

Then I talk to cherished friends who suffer anguish at the exploitation of the natural world, or I work with my piano students to help them master skills that will enable them to express themselves through music, or I watch my grandson playing with the baby goats in our front yard, and I am reminded that “We aren’t all bad.”

The eras of geologic history are separated by mass extinctions, as witnessed in the fossil records. PreCambrian, Paleozoic, Mesozoic, Cenozoic. Based also on the geologic record, the previous eras were millions of years in duration. We are responsible for the mass extinction we are witnessing now, and it’s happening much more rapidly than any we have evidenced in the rock records. If we compare all of geologic history to a half-mile walk, humans appeared mere inches before the end that represents today. From the first appearance of a human to now encompasses a few seconds on a 24-hour clock that represents Earth’s history.

To disregard and exploit everything on the planet for selfish reasons, with no check on ourselves, empathy for other species, or consideration for future generations, has got to be the biggest crime against this remarkable and fragile speck of a planet in the cosmos. We are guilty of that crime. Our lifestyles trap us in a system that is dooming life as we know it.

Nobody knows what will come of the situation we face today, but I have to wonder how we are any different from those early single cell life forms? One way is this: We know what we’re doing. Science has instruments to measure the health of our planet, and to record its ruin. Yet we seem unable to stop our actions. Assuming that the early life lacked thought processes and their waste contamination was purely accidental and a product of their success, I have to think this is vastly more irresponsible. To know and not to take steps to stop the atmospheric decline surely is an unpardonable sin.

Tanna, with the weight of this responsibility on our shoulders, how can we possibly presume to act as hospice workers in Earth’s decline?

I struggle to remind myself that we humans are as much a part of the universe as the meadowlarks and coyotes and deer and butterflies. And I also remember, through my mother’s experience with hospice, that it’s entirely possible to reverse the diagnosis. Mother was admitted to hospice, not once, but three times before she passed from this life. The first two times, she got better and was released. So hospice doesn’t always carry despair and finality with it. The challenge becomes restoring dignity, and easing the decline. Maybe—maybe—with enough of us working toward a solution, we can drawdown the greenhouse gasses in our atmosphere and restore the climate to one where life as we know it can thrive.

Hope is the other part of hospice. We must never lose hope. That’s why I’m writing these letters to you.

I love nature for the answers it suggests. How do we move towards the light? The prairie suggests, no matter how bad things may look, “Bloom anyway.”

I don’t laugh often enough, but when I do, it’s wonderful. Laughter is healing, as documented by Norman Cousins when he postponed his predicted demise by embarking on a process of regular daily laughter. Perhaps we should all do what we can to encourage flowers to bloom, to tickle the planet and laugh with nature.

This is absolutely an exciting time to be alive. We are on the edge of tomorrow, of a time when the course of history will be determined by our collective actions. Will we prevail? Will we assist nature to overcome this dire threat?

In the end, everything that we do matters. Every decision we make, every product we select, and every choice we make to fill our minutes will matter for the future. Through action, hope is born and hope is crucial to redemption. Never forget that. Never lose hope. To do so would cement the terminal diagnosis of the planet. 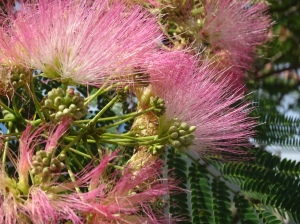