“Hays rose out of a mist that morning. The pre-dawn light–so much, so early–surprised me. Birds all over the world twenty-four hours a day are singing a continuous pre-dawn chorus as the earth turns on its axis.”

The annual Flint Hills Folk Life Festival was held last weekend on the shady lawn surrounding the historic Chase County Courthouse in Cottonwood Falls, Kansas. Each June, the organizers of this event plan it to coincide with the Flint Hills Symphony concert performed by the Kansas City Symphony.

A freak storm on the eve of the symphony weekend ended up cancelling the big musical performance, but the Folk Life Festival continued. Wandering music lovers discovered music on the lawn, just a few miles up the road.

There was even a bit of dancing.

If you took a closer look at the exhibits, you’d find artists demonstrating skills from the nineteenth century. You might find a basket weaver. 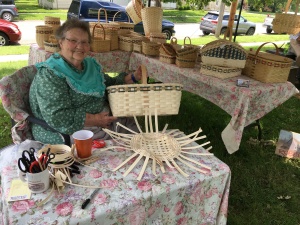 You’d find a field station for a frontier army, 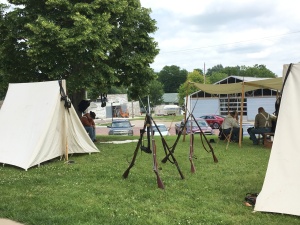 and Union soldiers patrolling the grounds.

A mountain man displayed crafts and toys made from feathers and skins. 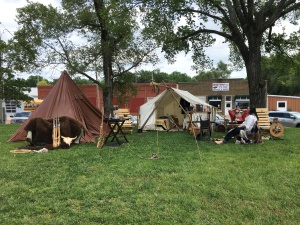 A row of tents under the elms held many textile crafts with artists hard at work.

And you might even be invited to try your hand at various activities. I helped with a quilting bee, 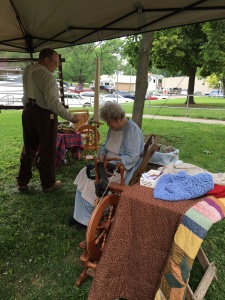 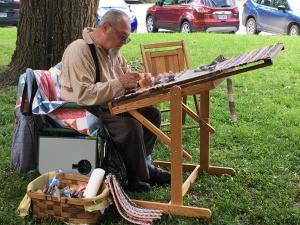 as well as conversion hints to turn my grandmother’s old red-eye Singer 66 treadle sewing machine into a hand-cranked version.

You could find a potter, busily throwing new kitchen pots on an old-fashioned kick-wheel

or a woodworker making spoons from chunks of firewood. 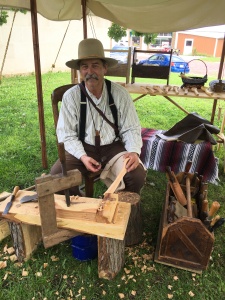 If you get thirsty, how about some homemade lemonade, or even root beer? 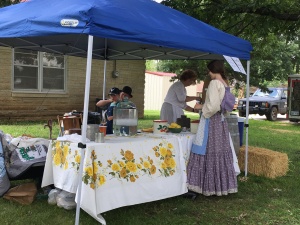 And to remedy the nibbles, some kettle corn, hot and fresh. 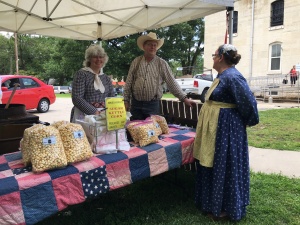 You might even find a book or two written by a prairie author, featuring life in those Flint Hills surrounding the historic courthouse. 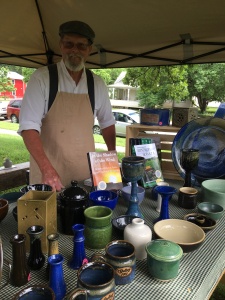 If you took some time to sit in the shade a spell, and exchanged pleasantries with some of the other visitors, you would encounter people from several nearby communities–Council Grove, Americus, Emporia–as well as Wichita and Kansas City.

You  might even find folks from as far away as Minnesota and Texas, who had chosen this weekend to explore the Kansas Flint Hills.

Disappointed symphony fans who took the time to look around returned home with an unforgettable memory from picturesque Cottonwood Falls.

With nature weirding into increasingly unpredictable and extreme weather events, the skills on display at the courthouse might even come in handy in the not-so-distant future. Take cues from the youngsters dashing around the courthouse, inventing games, twisting ropes, and flying feather kites.

Life without all those electronic gadgets might have its upsides too.