Sheltering at home has not prevented or even postponed any adventures in life. Maybe it changed the route a bit. But like the proverbial door versus the window, my window opened onto an international stage and increased my exposure to international connections. And THAT, friends, is a most exciting adventure.

About a month ago, I received an email invitation to join a virtual book launch, London time! You know me and books, not to mention book launches. This book spoke to my heart, Every Woman’s Guide to Saving the Planet, by Natalie Isaacs. I had to make that Zoom launch.

With no clear recollection of the date I first learned about Natalie Isaacs and her Australian-based environmental group 1 Million Women, I do remember being intrigued and I signed up to support the mostly Australian project in my Kansas grandmother’s heart. We all recall the horror felt in the sights and sounds of the rash of bush fires in Australia last January, as well as the bleaching of coral reefs off Australian beaches. Climate change has no boundaries on the planet. Go for it, Aussie friends!

I wanted to participate in this book launch. It had an international, boundary-ignoring appeal. So I dragged myself to my office early in the morning of August 18 to meet faces from Australia, the UK, and other nations around the world, (Spain, Philippines, Germany, Canada) as well as a few other participants in the states (Illinois, California, Arkansas, Ohio). The organization Natalie founded in 2009 has received international awards at the UN Climate Conferences.

On that Tuesday morning, at 6:30 am, Natalie Isaacs launched her book to the UK. She herself, and many other participants, spoke from Australia where it was evening already. In London, it was 12:30, lunch time, and it was morning in the west.

With a youthful countenance that belies her grandmotherly status, Natalie opened the meeting with the notion that we are talking about profound behavior changes and how to make them stick. A cosmetics manufacturer for 24 years, she had heard about the climate challenge, but believed there was nothing she could do about it. Then came 2006, and the release of the documentary An Inconvenient Truth. The problem became hers and she set out to learn what she could do about it.

“When you don’t know enough about something, it’s easier to do nothing,” she said.

After 2006, she did something—something simple—but she saw an amazing result and it changed her life. She discovered ways to reduce her family’s electricity consumption by 20%. She realized that climate change wasn’t somebody else’s problem. “It was about me, and about living a different way of life.”

A lot of personal witness and encouragement was shared in that one-hour Zoom call. Towards the end, she offered a few minutes of break-out time with other participants. I was thrilled to be paired with a 30-something woman, Anna, in Melbourne, Australia. How invigorating to share perspectives from opposite sides of the planet!

Wrapped tightly in a warm robe, Anna was preparing to retire for the night. Her window already revealed nighttime outside. I was first a bit puzzled why she looked cold—it’s so warm here—until I remembered that it’s winter down under!

We returned to the main group moments later to wrap up the session. Natalie Isaacs gave two important take-away thoughts.

#1: We must understand—in our hearts (the woman’s realm) as well as our heads—that everything we do shapes the world. Though individual actions and choices seem inconsequential, we must realize we are a collective! Just do something. One small act leads to another.

#2: We need to nurture a relationship with Earth, just like we do with our families and friends. When you truly love something, you fight for it. And it’s a reciprocal relationship. Earth provides everything needed for our healthy, satisfying life. “Don’t take without giving back,” Natalie said. It’s as simple as that.

I just had to have one of her books. Clicking on the links provided, I ran into the same roadblock every time. The book suppliers and outlets do not yet have delivery options in Kansas, nor I suppose, in any of the states or countries in the western hemisphere. On the Amazon website, I learned that the US launch on Amazon will occur late this month (September 2020.) However, the e-book is already available.

The book’s prologue on my Kindle described the history of 1 Million Women. I learned the organization was launched in 2009. It is the story of individual women taking on the climate crisis by changing everyday “behaviours” (habits). Sections in the book give “Toolkits” for addressing consumerism and overconsumption, food, energy, plastic use, fashion and cosmetics, economic power, the burgeoning waste stream, and travel.

There is a free app you can download on your smart devices to help discriminate between choices. (Search: 1 Million Women app).

There is no time to waste, Natalie reminds us. “No time to talk about guilt or scold ourselves.” Just do something. With action from a million women—a million women on every continent, I would add—“Together we can literally change the world.” 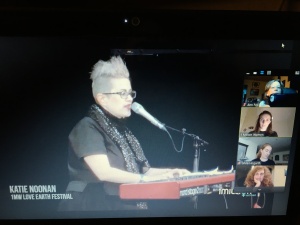 The Zoom meeting concluded with more music from a previous Australian Love Earth festival, Katie Noonan singing “I Am Woman” and it brought back memories of Helen Reddy’s voice: “I am strong. I am invincible.”

What are you waiting for? Please share this post. Order one of Natalie’s books. Connect with your friends. Make some new friends. Take action.