“Earl Nightingale said the hardest job you can tackle is thinking a thought through to its end. That’s what writing is. You get an idea and not only have to think it through but revise it many times to make it more effective.”

This morning I headed to the college in Arkansas City to prepare pianos for the spring semester. My mind was drawn to the day I worked at that same task one decade ago. While busy twisting tuning pins, getting the fleet of pianos tuned up after the dry winter air soured them, my phone rang. It was the hospital in Winfield. My dad had arrived and was having “a little heart attack.” To this day, I cannot fathom why the medical person called it “little.” They had decided he should go to the Heart Hospital in Wichita. Do I need to drive him there, I asked. No, she said, we will send him in an ambulance.

Thirty-six hours later, after a procedure in Wichita, after  my sister from northern Kansas arrived, after a lengthy visit or two in his hospital room, laughing and remembering, and saying “I love you,” after a last phone message recorded on my answering machine while I was en route home, (“Please bring my walking stick next time you come up. Don’t make a special trip.”), another heart attack took his life. It was January 13, 2010.

We were called back to the hospital late at night by a nurse who didn’t think he’d make it through this one. This was the Heart Hospital. She ought to know. Kay and I dressed hurriedly and rushed back, fretting through a cantankerous stop light that refused us a green, running it red, racing to the parking lot and dashing in, only to learn he had just passed.

And so, in that moment, the role of grizzled and wise family elder passed to my sisters and me. We were orphans.

That was ten years ago. I marvel at what he and my mother missed in those ten years. Though I miss them more than ever, life goes on. Things my dad missed include weddings of several of his grandchildren, and break-ups of others,

births of my three grandchildren, as well as several of my sister’s, watching them grow,

remodeling a building in downtown Winfield into an art gallery, 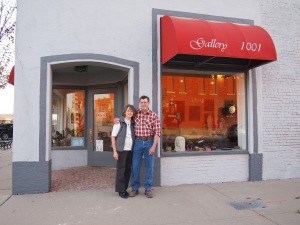 I also marvel at the way my dad’s death opened a new chapter in my avocation. He was a master at new chapters. And he taught me well. When you face inescapable changes in life, it is far better to embrace them and turn a corner to new adventures than to wring your hands in despair. Losing my dad reminded me that you can’t take life for granted. If there’s something your heart urges you to do, do it. Conversations and events in the days following his exit convinced me to return to writing, an ambition from my early years. It was time to finish a book I’d started 28 years previously. I’d put it aside to raise a family, and to get beyond the emotional upheaval of those times. For ten years now, I have risen early to put pen to paper. And I have finished three books in those ten years.

In the Shadow of the Wind went to press in 2014. Two years later I finished Sundrop Sonata, a novel of suspense started in my wild imaginings 12 years previously during the summer following my mother’s death.

And as I write this today, Sonata of Elsie Lenore, a sequel to Sundrop Sonata, is ready to upload to the printer. It should be accessible by February 9.

Book #3 has been an adventure of another kind, taking me to Cuba ten months ago, bringing new friends into my life and bolstering old friendships. (More about this in future posts.)

Three books in ten years. I think my dad would be pleased.

With his career thriving and a baby on the way, life looks good to Stefano Valdez, a Cuban classical pianist. Then a postcard from the past shatters his world. Days before the expected birth, he heads south to find the author of the card, a sister he long believed to be dead. Trailing her to Cuba, he unwittingly places his Kansas family in the sights of the crime ring that destroyed his sister. Will he discover the hidden message in her hastily-penned words in time to save his family?

One thought on “A New Chapter”