A young friend of mine was asked to review Sundrop Sonata for the Piano Technicians Journal. She sent these questions after reading the book.

What inspired you to write Sundrop Sonata?

I have always loved make-believe. As a child, my vivid imagination once had me living in a city where everyone’s feet were wheeled. I rolled round and round the basement of my next-door friend’s house on skates as we played out various make-believe scenes in our wheeled city.

The big elm tree in our front yard became a sinister resident of “the forest of no return” after we saw the Christmas movie Babes in Toyland. I used to pretend my very life depended on my accuracy and memorization of a recital piece—Grieg’s “Wedding Day at Troldhaugen”.

When I am alone, which is often, I rarely feel lonely. The characters in my mind create a running conversation with me and have provided inspiration for some of my fictional characters. I used to think everyone’s mind worked the way mine does, but now I’m not so sure.

The storyline of Sundrop Sonata came to me in a rush the summer of 2003. My mother had just died after a prolonged decline with congestive heart failure. This was less than two years after the terrorist attacks of 9/11 and, like many others, I felt the vulnerability the attacks had exposed in our country.

That summer my family and I drove from our home in Winfield to Oregon, to visit friends. Much of the road trip in Sonata was inspired by our travels that summer, from the basic route, to the idyllic setting on the Oregon coast, to the river raft trip on the McKenzie River. Though we weren’t fleeing for our lives, my imagination had us running a game of stealth, hide-n-seek. Perhaps this was one way I set about healing the hole in my heart from my mother’s death. It was an escape from reality.

Also on that journey, we did a bit of racing through Idaho to arrive in a town with a movie theater in time for the late show. The first episode of Pirates of the Caribbean had just hit theaters and we wanted to see it. We loved the show and even saw it again at a theater in Oregon. The loveable, quixotic, easy-going character of Capt. Jack Sparrow lent a few traits to the Brett Lander character developing in my mind—mysterious, worldly, nonchalant, and (in the end) a good man.

By the time our journey was over, the entire plot of Sundrop Sonata had written itself in my mind. A few details had to be fleshed out, and the whole thing had to be converted from scenes in my imagination to a written manuscript, but the story was there. And I was excited. It was a good story. I have always felt that. My challenge was to write it so that others would enjoy it too. Perhaps other people need a break from the reality grinding away at their lives, to escape for a few hours.

Where did you get the ideas for the main characters?

Aside from the pirate movie, encounters with various pianos or piano owners (or in some cases the lack of encounters) left me with unanswered questions. I made up stories to answer them. For instance, there really was a woman isolated in the wild northern hills of our county, raising two daughters (not twins) and home-schooling them. The gate to their house really was remotely controlled from the house a mile distant. I had to call the house from a device installed at the gate to gain admittance to the pasture.

I never saw anything beyond the music room at that house until twelve years after my last service call. The house and ranch was up for auction last year and I went to the auctioneer’s open house to satisfy my curiosity. I had only glimpsed the children once in half a dozen visits. They seemed quite shy, and a little naïve about the rest of the world. The woman seemed of an age she could have been the girls’ grandmother. But she wasn’t. I never saw the man of the house, but neighbors whispered suspicions about him. It was thought he was a foreigner, Arabic most likely, a rumor likely influenced by the terrorist events of 2001. 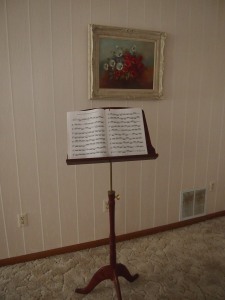 My last service appointment to this house was canceled, last minute. I never heard from them again. At the open house, it was clear the place had been abandoned and unoccupied for a decade. Everything but the piano appeared to still be there. School papers, kitchen dishes, photos of the girls on the walls, clothes in the closets. The exterior door to the music room had been kicked open forcibly, the locked deadbolt splintering the wood of the door frame.

Who were these people? Why were they so secretive? What happened to them? I am not entirely sure. I made up a story about the family which is likely a far cry from actual true events.

At about the same time, my husband and I had purchased a quarter section of land in the wild southern part of the county. We once thought to build a retirement home there, complete with a fancy piano shop such as Izzy had. The circle of cedars which hid Izzy and Laura as they watched the break-in of the house really exists, as do the tallgrass pasture lanes and tree-lined creek bottom. The house and shop do not.

The murder/suicide really did happen to a piano client of mine, just not in Wichita. I learned about it in our local newspaper. There was conjecture about a love triangle, with a cheating husband in his mid-age crisis angering his wife of forty years to the point of violence, nothing traitorous to the country involved. But what if?

The solfege chart in a high school vocal music room was real, and was a revelation to me. My mind began to knit the threads of Ra/ra/ra together. I love codes.

Melody, Kurt and Izzy are loosely based on individuals in my own family. Unlike Izzy, I raised four children, not a single daughter.

There really was a Korean-born woman who called me to tune her Korean-built piano and fix a pedal damaged in its shipment overseas. The piano still sat on the bottom of a packing box in her home. Music books in the Thompson series, with Korean text instead of English, sat on the piano.

I heard about a piano falling out of a pickup at a street corner once, but it wasn’t this particular piano.