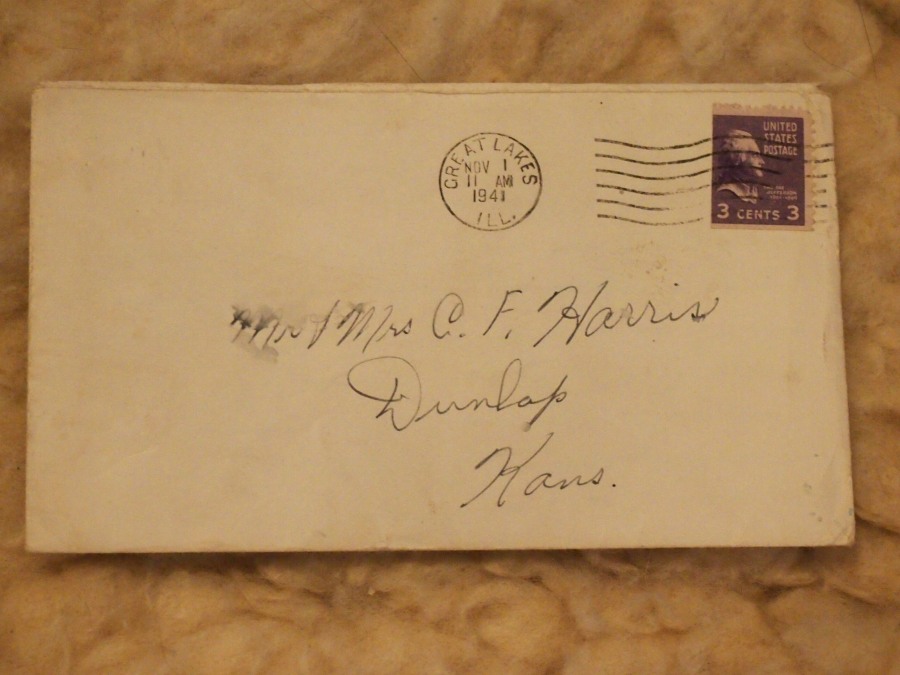 I have a little time now after dinner so will write a few lines.  I am getting along fine so far & like it OK.  We have pretty good eats & plenty of it.  We sleep in hammocks which are rather hard to get in & stay in, however I haven’t fallen out yet.  We are pretty busy most of the time, rolling clothes & etc.  We roll our clothes instead of pressing them.

We have been issued clothes, bedding & toilet articles including a comb.  After getting my haircut I don’t understand why they included the comb.  We have absolutely no use for it.  Maybe we will be able to use it someday, before I come home, I hope.  We haven’t been vaccinated yet, probably get those this afternoon.  If anyone asks about me writing them a letter I probably won’t be able to for the three weeks while in quarantine.  Our time starts Friday.

There are 120 boys in a company, sixty on this floor & sixty on the floor above.  They are a mighty nice bunch of boys, some are full of mischief of course but no bad ones.

I haven’t seen the sun since leaving Kansas City Tuesday evening.  We rode all night & didn’t get into Chicago until about nine Wednesday morning.  We crossed the Mississippi before daylight.  I was awake but couldn’t see much.  I think they must have been having a flood as it looked as though the water was all over the lowlands.  There were seventeen of us from Kansas City & we had a Pullman car all to ourselves.  We had breakfast in the diner at $1.00 per.  But we didn’t have to pay it.

I talked to Gentry over the phone a few minutes but it was so noisy I could hardly understand him.  I am sending my key in this letter.  Will have to close now.  Write soon.