In early March, 2019, I flew to Miami for the first time in my life where I met the rest of a tour group bound for Cuba the next day. Eight of us in the group took a tour with Mario, a Cuban-American bus driver, to see downtown Little Havana, a rough and tumble place.

He bought Cuban coffee shots for those who wanted to try it from an outdoor café and we walked along the streets, finally arriving at a Cuban pub for a first experience with mojitos–

and very loud salsa music. It was interesting to see the art hung around, even from the ceiling and watch young (or not so young) dancers. Though the lead vocalist, a woman from Puerto Rico, and  the percussionist were live, the main melody was a recording, so I would didn’t agree that it was live music. 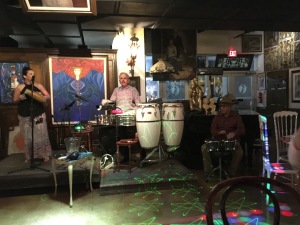 Toward the end of our stay, a guy joined in on the previously silent grand piano. Alas, the music volume was so cranked up, the piano was still unheard. I had not remembered earplugs, but started carrying them with me everywhere I went. However, I never needed them again. Cuban street music and performed music is genuinely live and is not limited to fortissimo volume. 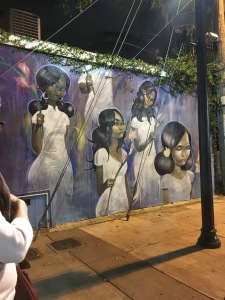 A mural nearby showed some black girls in white, representing a weekly Sunday ritual in Havana, a silent protest against the communists in Havana. 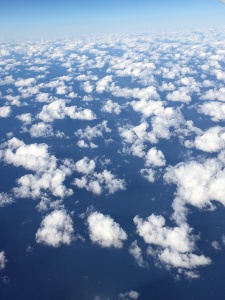 The next day our group caught a flight to Santa Clara, Cuba. Our tour was a People-to-People tour sponsored by Road Scholar. I didn’t know what to expect, but I was ready for anything, to soak up the experience as research for the scenes from Sonata of Elsie Lenore that are set in Cuba.

My first view of Cuba from the airplane was through clouds, but I identified agricultural fields, and a field of solar panels. The time was 4:45 pm EST.

We landed at the Santa Clara airport* at 4:55, de-planed down a set of stairs and walked to the airport door. My first step in Cuba occurred at 5:02 pm.

It was a long day of waiting for a little bit of travel, but we had finally arrived and worked our way through Cuban customs. One lady’s checked bag was lost, but the rest of us gathered our bags, met our Cuban Guide Ilen (pronounced “Elaine”) headed to the waiting bus where we met our bus driver, Ernesto. Our first views along the road included horse-drawn wagons, rough dwellings, banana, guava, and maybe tobacco fields, and lots of palm trees. Trash was piled at intervals in the roadside ditches, or in waterways. Dogs scratched through the refuse. A dead dog lay in one ditch, with vultures gathering.

Then we arrived at our lodging, Los Caneyes, and WOW!

*In the last few months travel to Cuba has been restricted only to the Havana airport. Americans today would not be able to duplicate the itinerary we enjoyed.

Download the KINDLE version Free for a limited time.