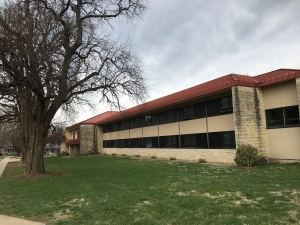 Mike Hartnett, a retired business magazine editor/newsletter publisher, currently serves as the president of Kansas Authors Club District 2 in Lawrence. At the October convention in Wichita, he will offer a seminar about his memoir And I Cried, Too. The book recalls details about his involvement in four murders that occurred in Central Illinois in the 1970s.

At the time he was an administrator at Lincoln College, in Lincoln, Illinois.  Russ Smrekar, a student there, was caught burglarizing a dorm room. Hartnett expelled him and turned the evidence over to the police. Three days later Smrekar was arrested for shoplifting three pieces of meat from a local grocery store. Long story short: he killed four people who were witnesses to these misdemeanors. Hartnett was very involved with the police, testified to the grand jury, was under death threats, etc.

The college was never the same for him after that. He had been writing part-time for two area newspapers, enjoyed it, and took a job as an assistant editor for a trade magazine. But his head was filled with the murders – things that were never reported. Smrekar was eventually convicted of two of the murders. When he was dying in prison about ten years ago, he admitted to the two other murders. Those remains have yet to be found.

One of the highlights of Hartnett’s life was spending a morning with the late William Maxwell, who was the fiction editor of The New Yorker. He encouraged Hartnett to write the memoir. For a year, Hartnett wrote the saga, but about the time he was almost finished, he was promoted to editor, which meant a lot more work and travel. He put the murder manuscript aside – for about 35 years.

“About a year ago, a police detective in Illinois tracked me down in Kansas to tell me there was a new development in the case,” Hartnett said. New development? Smrekar died in prison years ago after admitting to all four murders. “The detective couldn’t tell me what the ‘new development’ was, but as we talked, it was clear we were in agreement: Smrekar probably had an accomplice for at least some of the murders.”

He decided there might be another chapter to write. Nothing new has developed, however, and he decided he better finish the book before it finished him. If all goes as planned, he will have fresh copies of And I Cried Too at the Wichita event. Coming summer/fall 2019 from http://www.meadowlark-books.com

One thought on “Recalling the Nightmare: Memoir”