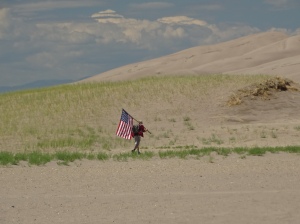 Last month, my grandson’s elementary school celebrated “Hero” day. Each student was encouraged to invite a personal hero to share lunch with them at school. For the majority of children, that meant a parent. To children, their moms and dads are real life heroes.

I had to wonder, “What makes a hero?” My dictionary says it’s someone who is admired and emulated for achievements or character traits, someone who shows great courage. To have courage is to hold fast to one’s convictions and remain true to oneself even in the face of tremendous obstacles. Perhaps the definition of a hero could be stretched further to include anyone who makes life better for someone else by example or action.

With that in mind, I suggest there are those among us who quietly set the standard, folks who are easily overlooked because they may not have the appearance of a strong, invincible hero. Their strength lies within. Kevin Olson is one such hero. 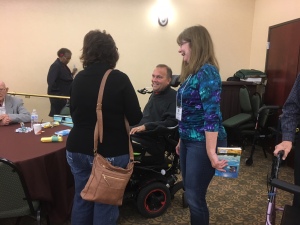 I recently heard Kevin speak about his life at a writer’s convention. A man who suffered an irreversible neck injury as a teenager, he’s been confined to a wheel chair for almost thirty years. He remains mobile with the use of a long straw connected to a computerized motor on his electric chair. Exhaling means “go.” Inhaling means “stop.” Other subtle air flow changes create right or left turns.

Through the use of a mouth stick (a long pointer manipulated by his jaws) Kevin wrote a book, one tedious letter at a time typed on a computer keyboard. Learning to Live With It (xulon press, 2013) tells how his accident changed his life. It describes his hopes and prayers aimed at regaining the use of his arms and legs, as well as his disappointment to learn that would never happen. Rather than sinking into despair, Kevin learned to adapt to a future he would never have chosen.

Kevin found meaning in his life, not just in public speaking, but as a tutor and mentor to children. Through their innocence and honesty, he learned important metaphorical lessons as he was helping them learn and grow. In fact, it could easily be that his young friends served as heroes for him, even as he fulfilled that role for them.

Kevin describes several of the big lessons he learned from little people in the second part of Learning to Live With It, as well as several metaphors he’s associated with life in general. The inspirational book is filled with his faith in God and his love for life, though faced with desperate circumstances. We could all benefit from his optimism to face whatever obstacles make us stumble through life.

I highly recommend this inspirational book. It is available through http://www.Amazon.com. 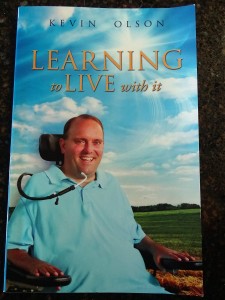