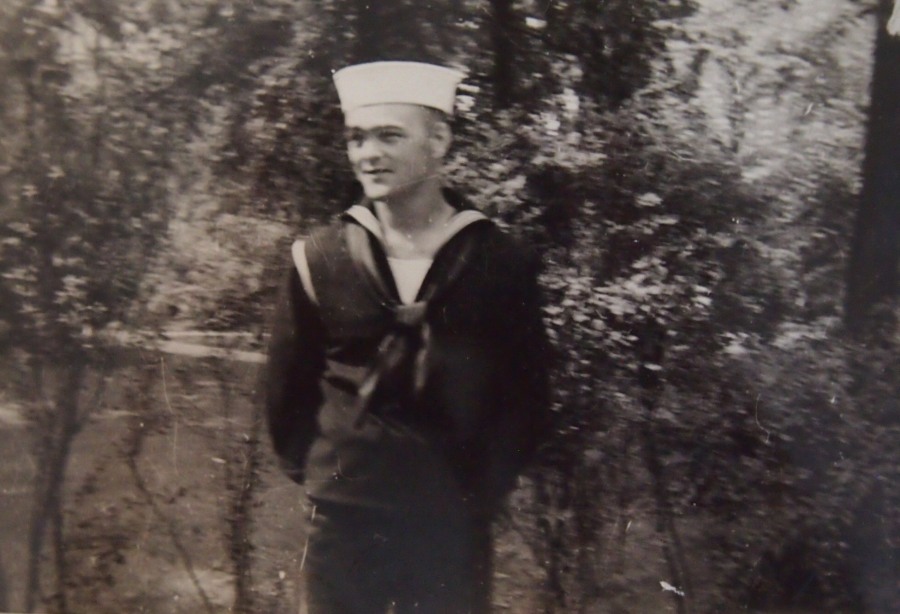 (Interestingly, this letter from 1941 clearly indicates that the days of the week this year closely match those of 1941. Here is it Sunday, November 10, 2013. Lester’s long letter postmarked November 10, 1941 was also written on a Sunday. Probably he wrote the letter on November 9.  In it he described the daily routine and activities of his experience so far.)

This is Sunday evening, six-thirty & I have just finished shaving & cleaning up for the evening so I will try to get a letter off before I start to study.  It is three hours yet till we have to be in bed though we can go to bed any time after seven-thirty.  We have supper about five o’clock on Sunday evening.  You asked what we did each day so I will try to go thru an average day for you.

We get up at five-thirty, dress & lash up our hammocks by six o’clock.  Then if we are having late chow, we clean up the barracks before eating.  We sweep, wash, wax, polish & shine everything.  By this time it is seven-thirty & time for late chow.  After chow we go to the field to drill or to a lecture.  We drill till eleven or twelve then back to the barracks for a little rest before noon chow.  The rifles we carry for drill weigh about eight pounds without bayonets.  The bayonets add another pound but we haven’t used them yet.  About one-thirty we go to drill again until sometime around four.  Again we rest before evening chow at five-thirty.  After that we are free to do as we please which means that we wash clothes, shave, take showers, get our beds made up, write letters, play cards or study.  You see we manage to keep busy.

Someone has to stand guard all the time.  The guards are four hour shifts which is plenty long to walk the floor.  My first guard was from midnight till four in the morning.  I had to walk back & forth about a distance of seventy-five feet.  Four hours of that gets pretty tiresome & monotonous.

This morning everyone except the guards & the Jews went to church.  This afternoon we went to a concert by an all-girl band.  The boys sure got a kick out of that.  I think the girls enjoyed it also.  On Monday, Wednesday & Friday nights we can go to shows if we want to go.  I have gone twice.  They are the same shows which you see at home.  Last night we went to a special show & lecture.  A Norwegian boy who had escaped from the Nazis in Norway told how they were annoying & fighting their Nazi conqueors.

I had a letter from Aunt Mabel the other day, also one from Frances.  I have received several letters, about one every other day, I guess.  I’m always glad to hear how you are getting along.

By the way, Wallace, if you had pants like we wear here, you would have to wear gloves to keep your hands warm as you can’t get your hands in the pockets on these.  There are only two pockets on the trousers, both at the waistband.  There is a flap in the front which requires fourteen (14) buttons to close. 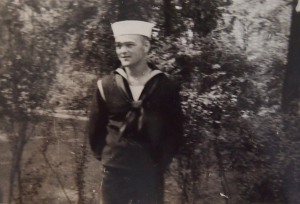 When you reach for the pockets, your hands just slide on over a row of buttons.  We wear an undershirt, a black woolen sweater & a navy blue jumper which ties tight around the waist above the trousers & then hangs down over the trouser waistband.  We carry most of our stuff in this pouch.  We have two of these outfits for every day wear & one heavier dress outfit with white braid on the jumper.  We have to wear leggings here.  They spoil the looks of the outfit but they do help keep the pant legs clean.  We have one pair of Sunday shoes & one heavy pair for everyday wear.  We have plenty of clothes, especially when it is time to wash them.  We have to do this in a bucket & with a scrub brush.  We don’t use clothes pins to hang them up with but tie them up with clothes-stops, pieces of trot-line cord.  We have a dryer room which we use in bad weather instead of hanging them outside.

We get our mail delivered at noon & again at about four in the afternoon.  Practically all of the mail comes in the morning.   I got your letter at eleven this morning which is the quickest of any yet.  Usually it takes two days.  If you have a chance you might send me some envelopes as I am almost out of any that are any good.  We received stationery here at the camp but the envelopes won’t stick.  You don’t need to send stamps as I can get those here.  I would rather have the self-sealing kind if you can get them.  Don’t go to any trouble as I can write cards of course.

I’m about pumped dry & really should study some as we are going to have some tests this week & I don’t have time during the week to study so I had better bring this to a close.

We will get twelve hours leave when we transfer to Camp Paradise but I think I will stay here probably & save the money I would spend.  We won’t have much left from this first check.  Write whenever you can as we are all anxious to hear from home.  The mailman is quite popular here.

I hope the rain has stopped for awhile.  Paul, I enjoyed your letter a lot, write again.  Did you get my stuff from Ernest’s suitcase?  I had a roll of film & some other stuff in there.  I may want my camera as I hear that we are allowed to have them.