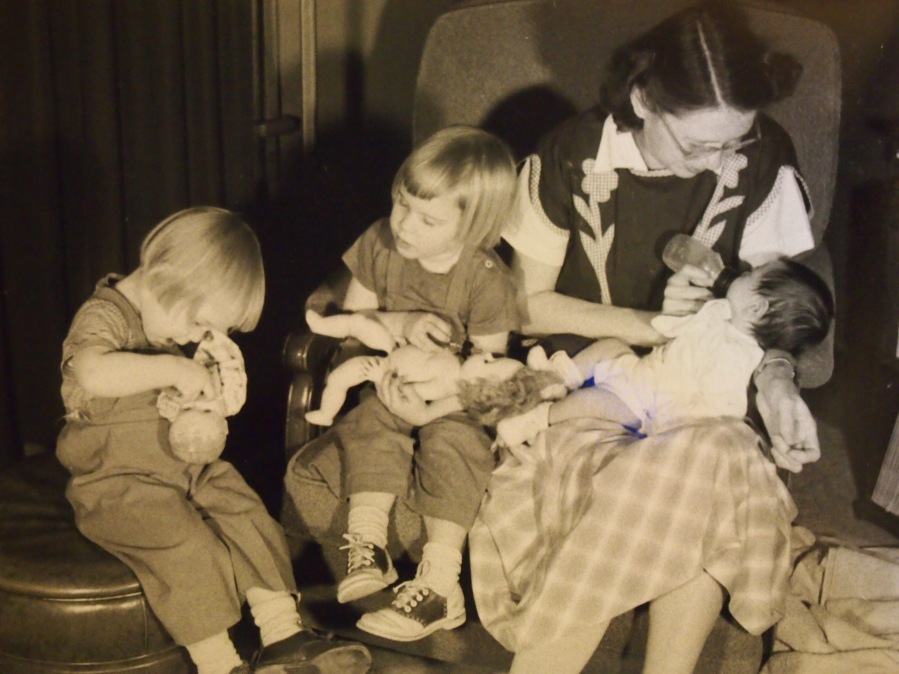 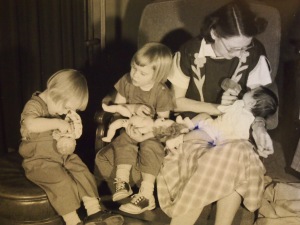 Last evening my grandson came for an overnight visit. When he finally settled down, he crawled up between his grandpa and me on the sofa. We cuddled a few minutes before he willingly headed to bed. I felt like a link in a chain, a connection between generations, made more poignant because today I’m thinking of my own mother. It’s been a decade since she was here to celebrate Mother’s Day with us.

Helen Peterson was born in 1918, the youngest of Franklin and Mary Peterson’s four beautiful, daughters. When she was five, her father unexpectedly died. The rest of her childhood was marked by hardship and sacrifice. Her mother bravely struggled to raise her family. Many of Helen’s lifelong habits of thrift originated during her childhood as she watched her mother’s efforts to raise her family, a single parent in the twenties and thirties.

I vividly recall her devotion to her own mother. The rest of her youth I sometimes have a hard time imagining. Helen as a young college student frolicking barefoot in the snow—in a swimsuit—I did not know at all. I did not know the young career woman who worked as an engineer at Western Electric, as a physicist at the Naval Research Laboratory in Washington, D.C. during World War II, nor the college physics and mathematics professor. Mother gave up all these phases of her life when she married my Dad in 1950 to become a full-time wife, mother and homemaker. That is the Helen I knew.

Mother did a lot of preserving with garden produce. It became a matter of pride to see how much of a meal could be produced from the seed to the table, especially Thanksgiving dinner. Other dishes which became family traditions include her apple coffee cake, cherry chocolate cake, and pecan pies at the holidays. These became favorites of my own family.

Determined that her daughters would have opportunities she did not have, as well as be exposed to things she had grown to love and appreciate, my sisters and I fell asleep listening to classical music that Mother played at bedtime on the record player. Sometimes she even played her favorite pieces on the piano. We took years of piano lessons.  And we rose early to practice before school every morning. For a few months when we were without a piano, she marched us to a neighbor’s house two doors down for our daily practice sessions.

Mother had never learned to roller skate or ride a bike, but she was determined that her daughters would have those experiences. She spent hours running beside us as we learned. We took swimming lessons every summer so that we’d be at ease in the water.

And we traveled. Our folks began to camp with us with we were still toddlers, when my younger sister was still in diapers. This was before the day of disposable diapers. Our camping trips continued as we grew. By the time we left home, we’d enjoyed treks through every state west of the Mississippi River, except California and Hawaii.

Mother loved people. She made two solo treks to England to look up distant relatives during her geneology searches. We were always on the list as a host family whenever any kind of touring group came to our hometown. She participated eagerly in the regional and international foods interest clubs. She enjoyed preparing meals for guests. She would do anything to help people. Being of service in some way was her greatest joy in life.

Mother was rarely sick. She was in remarkably good health most of her life. When she became ill in late 1999, we were quite shocked and expected the worst then. We rallied together, wrote our memories, and . . . she got better. My mother has the unusual distinction of being admitted and released from Hospice care, not once, but twice. She got better and read the thoughts we had jotted down and the obituary notes my Dad had put together. And she corrected them. Red ink all over our memories.

On this Mother’s Day, I remember my own mother with love. She never met my grandson, and he never met her. But I can surely tell him about her and how much she shaped my life. Happy Mother’s Day!

One thought on “Mother’s Day Tribute”